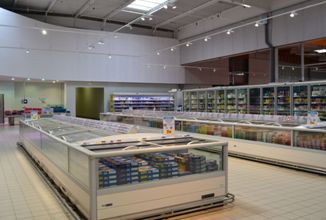 As part of the expansion of the Leclerc hypermarket in Querqueville, France, Gouville Froid SAS was entrusted with the design of the refrigeration system as part of a renovation project.

In the project analysis phase, it was quickly determined that the refrigeration system would soon need to be replaced as it operated using R-22, R-502 and R-404A refrigerants.   As part of the store's expansion, the project stakeholders agreed that a brand new system would be needed.

Mr DABOUDET, the site manager for Gouville SAS is committed to providing his customers with relevant, environmentally friendly, technical and economic solutions designed to respond to future legal requirements. He therefore suggested the refrigerant PerformaxTM LT (R-407F), recommended by Climalife, which he had heard about from colleagues already using it in this store. PerformaxTM LT was to be used with a micro-channel condenser to reduce the total cost of the equipment.

The end user was also aware of the R-407F performance. In the current context of the F-Gas Regulation review, the GWP of PerformaxTM LT (1824) is a strong argument for switching from R-404A (GWP 3922). R-407F and was therefore selected as the refrigerant for both the medium and low temperature refrigeration systems. 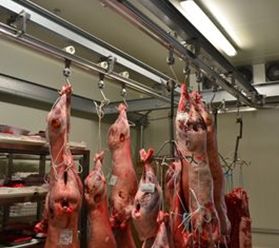 It was necessary to move the existing system, while still running, out of the plant room, so that the new unit could be installed and started without any loss of activity. The work took place from January to June 2013 with the new system consisting of three compressor racks.

After moving the existing system outside, Jérôme Daboudet and his team of six technicians installed the equipment in the low temperature cold rooms.

The HK REFRIGERATION low temperature compressor rack MOPSH 6HE 4N-28 consists of four BITZER 6HE28Y semi-hermetic reciprocating compressors. It has a nominal cooling capacity of 50.4 kW in a temperature range of -36°C to 42°C.  This rack is used to cool all the low temperature refrigerated units (cold rooms and closed refrigerated display cabinets).  In order to avoid any loss of business, the display cabinets were put into operation one by one.

The system is equipped with a HK REFRIGERATION micro-channel condenser with three independent circuits. This technology, which has been thoroughly tried and tested by the Lennox Group in air conditioning applications, provides condensers built as modules around W-shaped micro-channel coils.  It produces lighter, more compact equipment thanks to its high-performance aluminium coils, thereby meeting the requirement for smaller equipment. 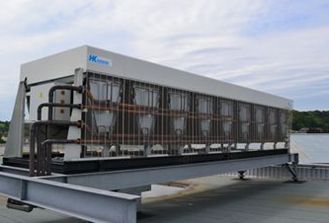 Another advantage of this technology compared with a conventional finned-coil solution is that the micro-channels make it possible to significantly reduce the amount of refrigerant in the system by about 125 kg, i.e. 20% of the refrigeration system's total load. When the system is used with R-407F, a refrigerant with a lower GWP than R-404A, the operator reduces his carbon footprint associated with indirect greenhouse gas emissions by more than 140 tonnes of CO2 equivalent / year.

This HK REFRIGERATION condenser (MXW EC1 8P18) is designed to operate with PerformaxTM LT and has three independent circuits which regulate the output of the three compressor racks independently.  A single condenser is therefore placed on the roof for operating the refrigeration system, thereby reducing the installation time.

Combining this technology with PerformaxTM LT has wider environmental benefits because less refrigerant is used in the system, further reducing its carbon footprint and lowering its energy consumption. What is more, as Climalife emphasises, PerformaxTM LT is easier to detect than R-404A, which helps to minimise the annual leak rate. There are therefore multiple benefits for the end user.

The challenge was met and the goals achieved, with the system now fully operational and there having been no disruption to the company's activity. The site manager, Mr Daboudet, and Mr Henry, the hypermarket manager, are both satisfied with this efficient and reliable combination of technology. 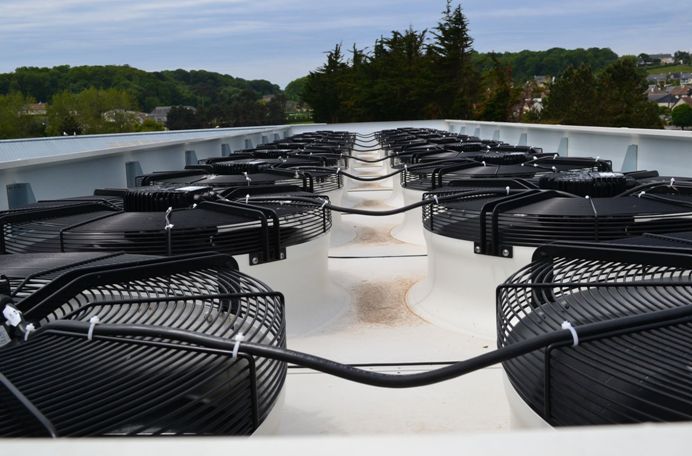