As Bogdan Mascas Radu, co-owner of Frigotehnics, explains « Climalife gave us the technical support we needed to undergo this conversion, enabling us choose the most appropriate solution ».

Founded in 1995, Mega Image is Romania’s leading supermarket chain, with a network of 410 local stores across the country, bearing the trade names of Mega Image, Shop & Go and AB COOL FOOD.

Mega Image is part of the Delhaize Group, an international food distributor established in Belgium in 1867, which now has a presence in three continents.

Currently expanding across Romania, with the aim of becoming « the customer’s number one choice for fresh, high-quality products, offering a unique and varied range in a pleasant environment ».

Mega Image decided to refurbish its stores and to take this opportunity to optimise their energy efficiency.

Due to the high GWP of refrigerants in the majority of existing installations, Mega Image needed to consider possible solutions for the future. As a result, its Technical Manager, Mr Casian, contacted Climalife to develop a range of thermodynamic models to compare R-404A with various other refrigerants on the market with a lower GWP – namely R-407F, R-448A and R-449A – all in different types of configurations.

The company’s aim was clearly defined :

To find a fluid with a lower GWP, reduce electricity consumption and optimise the efficiency of its equipment.

Bogdan Toma, Climalife’s Development Man¬ager in Romania, worked alongside Mega Image to aid its initiative, and called upon Climalife’s Technical Support to deliver the most appropriate solution.

Solstice® N40 (R-448A) was subsequently chosen as the best option for systems operating at a low temperature.

Within the operating range covered using R-404A, and compared to the alternatives, the discharge temperature measured with R-448A proved to be lower for low-temperature applications, thus reducing operating costs and the amount of energy consumed. 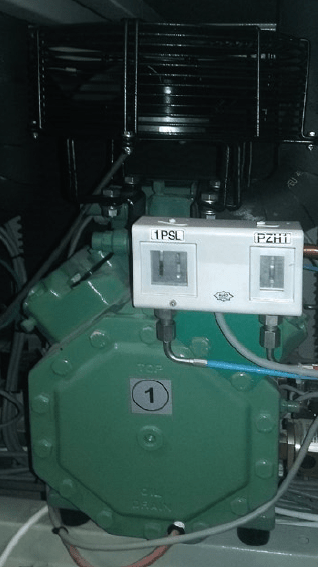 Mega Image was happy with this theoretical feedback and, for its first conversion, called upon Frigotehnics, a growing company offering comprehensive solutions for the commer¬cial refrigeration and air conditioning market.

From design to implementation, servicing and maintenance, Frigotehnics’ specialists have experience in dealing with a vast spectrum of situations.

A simple and effective conversion

For this initial conversion, a small supermarket with an area of 200 m² was selected in Obor, close to the centre of Bucharest. The R-404A refrigeration unit was mainly supplying the frozen food cabinets in the store and the frozen storage facility in the back room.

To avoid disrupting the company’s sales activity, the conversion was performed one evening after the shop had closed. The frozen products were placed in refrigerated cabinets before the work began on a mild June evening. For food safety reasons, the team had to work very quickly. The first step involved removing the 45 kg of R-404A from the system. The filters and used oil were then replaced and the Solstice® N40 (R-448A) was loaded without any practical constraints..

The quantity of R-448A required was smaller than the amount of R-404A originally in the system, as a surplus had been injected initially. The entire conversion was completed in four hours and the supermarket was able to open its doors again at the usual time the next day.

In conclusion, Solstice® N40 provides a better performance coefficient than R-404A for this type of installation.

“The advantage of R-448A is that it can be used directly as a drop-in replacement for R-404A, without changing any equipment. R-448A has similar pressure requirements to those of R-404A (equivalent LP and slightly higher HP (+1b)), but its cooling capacity is 10% higher on average, and its coefficient of performance is 6% better in comparison,” said Pierre-Emmanuel Danet, Technical Support Manager at Climalife.

It is the ideal solution for reducing the total greenhouse gas emissions from installations currently operating with R-404A. Simply switching to a refrigerant with a lower GWP (1,387 in the case of R-448A) means that we can continue to operate R-404A equipment and still comply with F-Gas requirements prohibiting solutions with a GWP greater than 2,500 and reduce global energy consumption to lessen the impact on global warming.

For Petre David Iulian, Maintenance Manager at Frigotehnics, “working with Climalife provided an excellent opportunity to learn more about inno­vative solutions in the refrigeration sector”. This conversion was the start of a whole series, and Mega Image is fully convinced that real solutions can be found to meet its long-term objectives. 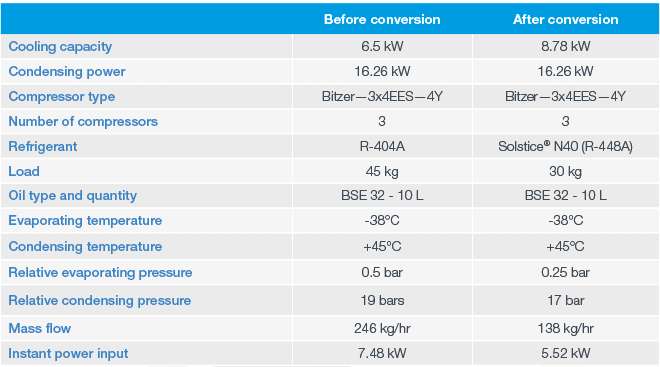