The above-zero refrigeration production unit of a crop storage warehouse that had been running on R-22 for more than 15 years was recently retrofitted with the new refrigerant, N40 from Honeywell’s Solstice® range

Holland is a country that prides its quality of potatoes; a speciality that has a long tradi­tion and benefits from a high level of research. Around eight million tonnes are grown each year.

The family business, MTS CLEVERING, based in Den Handel, in the north of the country, has specialised in the cultivation of seed potatoes since 1906. These potatoes are harvested at the end of the summer and then stored at a controlled temperature before being prepared for shipment around the world through specialist cooperatives from November to June.

A controlled temperature is essential for high-quality products

Rubertus Clevering pays careful attention to his seed potatoes during the storage period. He checks climate conditions to make sure that the potatoes remain dormant for as long as neces­sary or possible. A high level of moisture can shorten the dormancy period and temperature fluctuations favour the growth of germs. 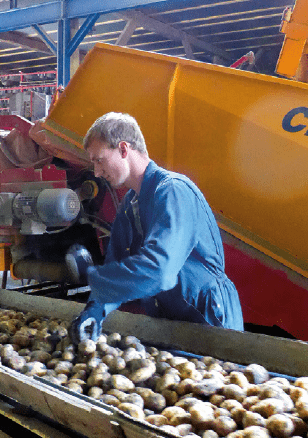 This Dutch grower uses the firm, Koeltechniek Noord, which specialises in industrial refrigeration for market gardeners, to ensure that his warehouse functions correctly.

In light of regulations that forbid the use of HCFC (even recycled) in Europe, which came into force on 1 January 2015, it was necessary to find an alternative to R-22, according to the installer, Peter Wierenga, to ensure the system’s long-term survival and to avoid any malfunction. After having considered several possible options, the new refrigerant, Solstice® N40, developed by Honeywell and distributed by Climalife, was chosen.  The installation is fitted with an above-zero rack with one Bitzer 6HE35Y compressor, two Helpman Thor evaporators and a Condor con­denser, and cools a 1000m2 warehouse at a controlled temperature of +3°C / +5°C.

The installer, before retrofitting with Solstice® N40, checked that the condenser and the evap­orators were of a sufficient size. The operation took place without incident this summer during a slack period for the warehouse. After draining the system, the 60 kg of R-22 was recovered and the mineral oil replaced with Emkarate 32 POE oil. Once the filters had been cleaned and the seals changed, R-448A refrigerant was charged into the installation and the superheat settings were adjusted. The installer also took this opportunity to isolate the pipes in order to avoid any condensation.

With a GWP of 1387, Solstice® N40 is a suit­able and lasting solution in light of F-Gas reg­ulations. All those involved were satisfied with their choice.