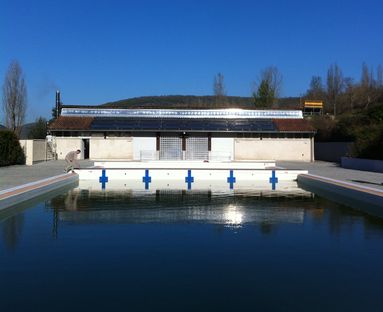 The town council in the charming locality of Saint-Antonin in Southern France have decided to combine tradition and modernity in order to provide their citizens with a quality public service with looks to the future.  The town has a wonderful sports complex made up of an open-air swimming pool and gymnasium, playing host both to school children and local residents.  When the time came to invest in a new heating system in order to replace old boilers, it was an opportunity to make the most of the valley's glorious sunshine.

The study into the heating and hot water needs undertaken by Olivier Delhomme from BE CD2I, helped to size the system to ensure coverage was optimal, eg heating for the comfort of visitors and users, and domestic hot water for the showers in both buildings, and for heating in the swimming pool during the summer.

Th company Bourrie, a climate control engineering firm which is a member of the Climater Group (with 450 employees mainly in Tarn et Garonne), was asked by the mayor of Saint-Antonin to carry out the renovation work on the facility.

The project proposed by Bourrie and accepted by the town council is as follows:  a dual network managed by an automatic control system which, depending on the needs and the frequency of use of one or other of the buidings, makes it possible to provide the necessary heat.

The hot water is obtained mainly using the solar heat network, which is piloted by the system's regulation device.
Description of the heating system: 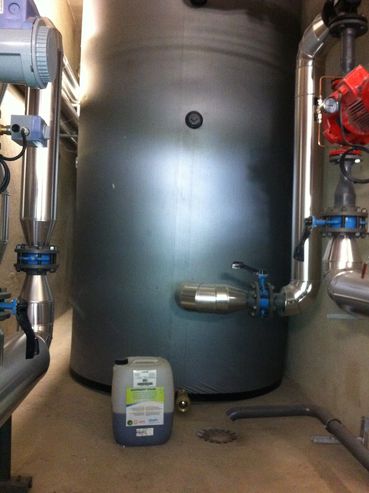 The partner of Bourrie for solar thermal power, De Dietrich Thermique* and Tereva Montauban, provided the whole solar thermal system.  To ensure the sustainability of the system, to protect against overheating, and for environmental reasons, the virtues of Greenway Neo Solar were chosen as the heat transfer fluid, eg the "blood" of the solar power set-up.

Because it has low expansion rates at high temperatures, it made it possible to size the expansion vessel accurately, thus reducing the overall cost of the installation.

Alexandre Priquet (Bourrie) said, "The fluid is very stable, and we have not seen any failure to increase pressure in the network.  In addition to its techical characteristics, the fact that it is plant-based is also a plus for the whole system."

Since May 2011, De Dietrich has turned to Greenway® Neo Solar for all its collective solar facilities because of its capacity to hold the high temperatures obtained during the summer periods and to prevent the accelerated degradation that occurs when a monopropylene glycol fluid is used.
Greenway® Neo Solar expands and deteriorates 4 times less at 150° C, allowing De Dietrich to set up facilities with lower maintenance costs and which are much more resistant to the high stresses they undergo.
A guarantee of quality and performance for its customers and a pledge of confi dence for Climalife!

*  Internationally reputed manufacturer of heating equipment, a member of the BDR Thermea Group, Europe's third largest group for the supply of heating systems.