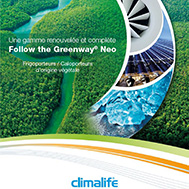 Climalife, a leading specialist in the formulation of heat transfer fluids for more than 30 years, is strongly committed to solutions from plant resources.

The Climalife R&D department has developed and patented this new formula Greenway® Neo for use across a range of applications including refrigeration, air conditioning, heat pumps, central heating, thermal solar energy and sprinklers. Climalife's objective is to offer a reliable and effective technical alternative to traditional mono propylene glycol (MPG)-based fluids.

In compliance with the ISO 11930 international standard, Greenway® Neo is bacteriostatic*; this anti-microbial protection prevents bacteria proliferation in thermal facilities.

The new range of Greenway® Neo is approved on the A list from the French General Health Department for heat treatment by single water exchange intended for human consumption as defined by ANSES and also approved by Belgaqua, the Belgian Professional Federation for the water sector, according to the standard NBN-EN 1717 as a fluid category 3.

Advantage : a lower viscosity than that of Mono-Propylene Glycol which is traditionally used for this type of application.

Advantage : low degradability in a circuit slows its ageing, providing protection against periods of stagnation, avoiding "tarring" of collectors and systems, and giving installations a longer working life.

Advantage : a reduced risk of polluting the ground in the event of a system leak.

Contact your Climalife sales representative for more information on the Greenway® Neo range of dilutions available.